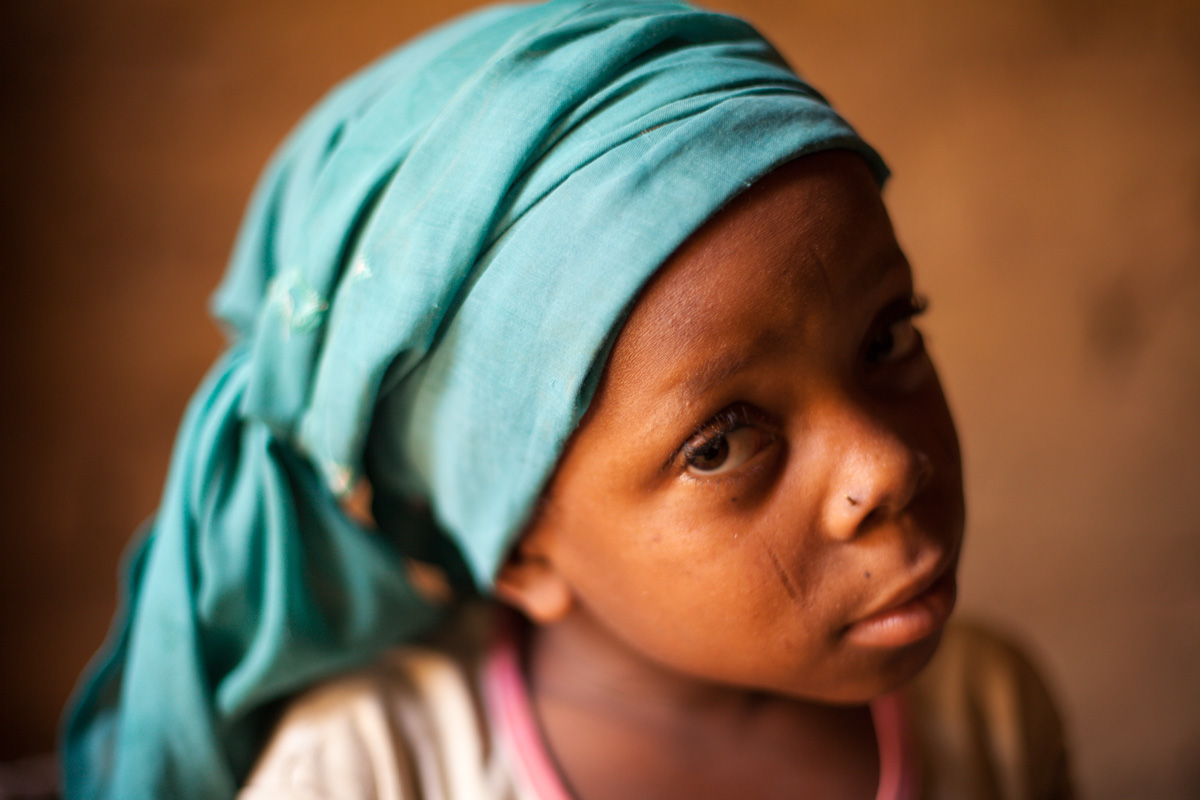 One of my photos from last year in Niger was used for the month of August in CARE‘s wall calendar, which is a good excuse to talk about that image and the related series of portraits.

It shows the hands of Delou Ibrahim, holding sorrel leaves, used as a condiment, and grains of sorghum at her home in Saran Maradi, Niger.

The Sahel region, which stretches from East to West Africa including Niger, is periodically hit by food crises. I was interested in knowing more about the specific impact of the 2012 crisis, so I talked to women; they are generally the ones who struggle to feed their families in times of hardship.

People affected by food crises in the Sahel are generally portrayed as powerless victims, so I also wanted to give this story a different visual approach, hoping it would make viewers across the world relate to them at a human level. Therefore, I took photographs up close, focusing on details and expressions, and composed family portraits with three elements: mothers/grandmothers, their children/grandchildren, and the food they consume at home.

You can see the final images here.

Delou is the elder lady in the first image of the series. She was 70 years old at the time I spoke to her. She had four children and suffered the loss of nine. She had about 40 grandchildren, 16 of which lived with her.

Despite all the difficulties they have endured, these women were an example of humility and resilience.

Now, some details about what went into creating the images.

Sun rises very early and very quickly in this part of the world, so natural light was very harsh; vertical, direct sunlight. To counter that, I photographed most of the food shots in the shade, under the few trees I could find. As for the portraits, I asked the subjects to pose inside their homes. Thatched-roof huts and adobe houses generally have only one small door (about 1.5 meter high) and no windows, so once you get inside there is very little light available. I made sure the door was fully open and nobody was standing on the way, and used a fast lens (50mm 1.4) so I could have a stable shot at 1/40-1/50 and use a low (and low-grain) ISO. Having a reflector could have come in handy in this situation, but it is not essential. In the end the appearance of the light is quite soft, and some images have a Dutch/Flemish painting look to them, particularly in color.

Latifa, 8, poses for a photograph at her home in Saran Maradi, Niger.

Composing the final B&W triptychs was a very interesting process. It was not only a matter of picking the best image for each category and family, but making sure they went well together. While editing, I noticed common elements such as backgrounds, patterns, head scarves, earrings, tones… and tried to match them. It was also necessary to take into account the direction of the eyes and the heads, in order to give the final image some dynamism. Viewers are somehow guided to read the image in a certain order, as they follow the eyes of the subjects and the different lines and shapes.

Adobe Photoshop CS6 and Lightroom 5 both have automated ways of doing diptychs and triptychs, but you might want to do your own layout (using guides and an overlaid frame) for better and more personal results.

Composite images and serialization offer plenty of possibilities, yet are quite underutilized in documentary and editorial photography, in my opinion. Not only are they a way to try something more creative, but also a storytelling resource which can give images additional interest and meaning. Serialization also pushes you to think beyond the individual image; it is the type of creative constraint that will make your craft go further and achieve something you had never considered.

I would love to hear other people’s thoughts and experiences with serialization in the comments.